Civics! An American Musical guides students to learn about historical events, understand their civic impact, and create a virtual show.

When it debuted six years ago, the musical “Hamilton” became more than a worldwide sensation: it provided an entry point to American history for thousands of students, and it proved that civic learning and the Broadway stage could be a perfect match. Inspired by that success, CIRCLE worked with a team of partners on a new educational video game, Civics! An American Musical, which helps students learn and think about history and politics as they create their own virtual show.

Civics! was developed by FableVision Games through a grant from the Library of Congress’ Congress, Civic Participation, and Primary Sources Projects program. CIRCLE served as the primary expert consultant on the game’s content, providing input at each stage of its development shaping the lessons that students can glean from the game. In particular, we worked to ensure that the game would tap into students’ creativity and guide them to think more deeply about connecting historical events and their understanding of individuals’ role in civic life. The game is freely available to all educators and students.

CIRCLE has been a frequent partner to developers of civics games and other interactive educational tools that can be used in and out of the classroom. We previously worked with iCivics on DBQuest, and with Muzzy Lane Software and the University of South Florida on Kid Citizen, both of which were also developed for the Congress, Civic Participation, and Primary Sources Projects program. We believe these and other games can be a valuable tool to make civic learning engaging, to spark students’ imagination, and to help bring the past to life in ways that connect to their civic lives today. 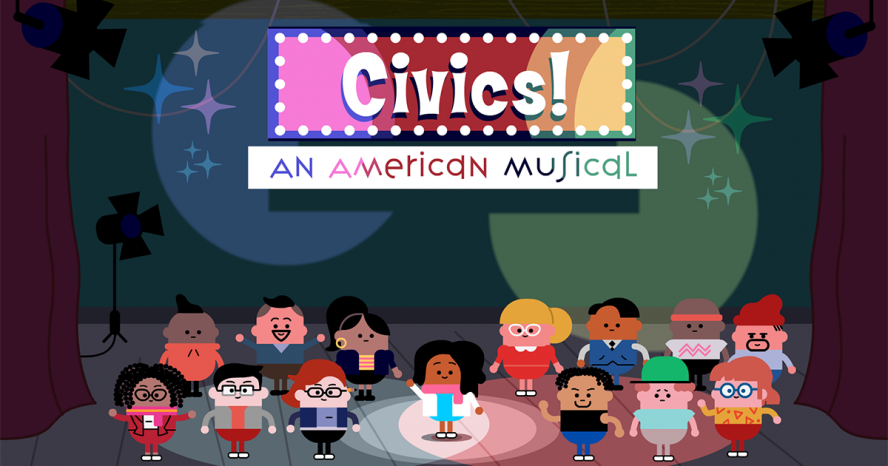 In Civics! An American Musical, students choose to focus on one of several events in American history: school integration, the establishment of national parks, the Chinese Exclusion Act, or the creation of the FDA. Through the game, players do far more than learn about the facts and the historical figures associated with each moment; they engage in a process of inquiry that leads them to consider the roles and responsibilities that individuals and institutions played in these landmark events. Civic learning through inquiry is a key part of a comprehensive approach to deeper civic instruction, as recommended, for example, by the recent Educating for American Democracy Roadmap. The game helps students draw these lessons from the past and think about how they may apply to their present and future, as they develop civic skills and dispositions that help them engage in problem-solving in their own communities.

Other aspects of Civics!, including minigames focused on designing various aspects of the musical, help students learn to analyze primary sources, to think about the perspectives and motivations of various historical actors—and connect them to their own views—and to understand the role of civic institutions like federal agencies and the courts.

Alongside the game itself, Civics! includes resources for educators, including a teachers’ guide and lesson plans that can help expand on what students learn and experience while playing the game. We’re proud of our work on Civics! An American Musical and we believe that it can be a valuable tool in an ever expanding-toolbox that helps teachers make civic education engaging and relevant for the 21st century student body.