Civics for the 21st Century

A new report co-authored by current and former directors of CIRCLE highlights the vital role of k-12 civic education in protecting democracy.

Yesterday, CIRCLE Director Kei Kawashima-Ginsberg and former CIRCLE Director Peter Levine released a new white paper, “The Republic is (Still) at Risk — and Civics is Part of the Solution,” at the Democracy at a Crossroads National Summit in Washington, D.C.1

In-school civic education opportunities provide a foundational basis for youth civic development, which is supplemented by civic development and action opportunities in other settings. However, federal data continue to show that the public education system is not creating this foundation for all youth. Fortunately, research and emerging practice provide promising directions for responsive practices which, together, can work towards all youth leaving the k12 system with foundational civic skills and identities.

In their paper, Kawashima-Ginsberg and Levine outline some civic challenges and opportunities in the US, particularly as they relate to young people, and with special attention to the gaps and inequities that affect low-income youth and young people of color. They cite our recent work on civic deserts and other ways in which marginalized young people lag behind their more advantaged peers—from the schoolroom, to the ballot box.

For example, they write “8th-graders whose parents had completed college and whose families had enough income not to qualify for free or reduced price lunch were more than five times more likely to score ‘proficient’ on the 8th-grade NAEP Civics as those whose parents did not hold a high school diploma and who met the criteria for free or reduced-priced lunch. In 2014, no students in the latter category scored at the ‘advanced’ level on the 8th grade NAEP.” 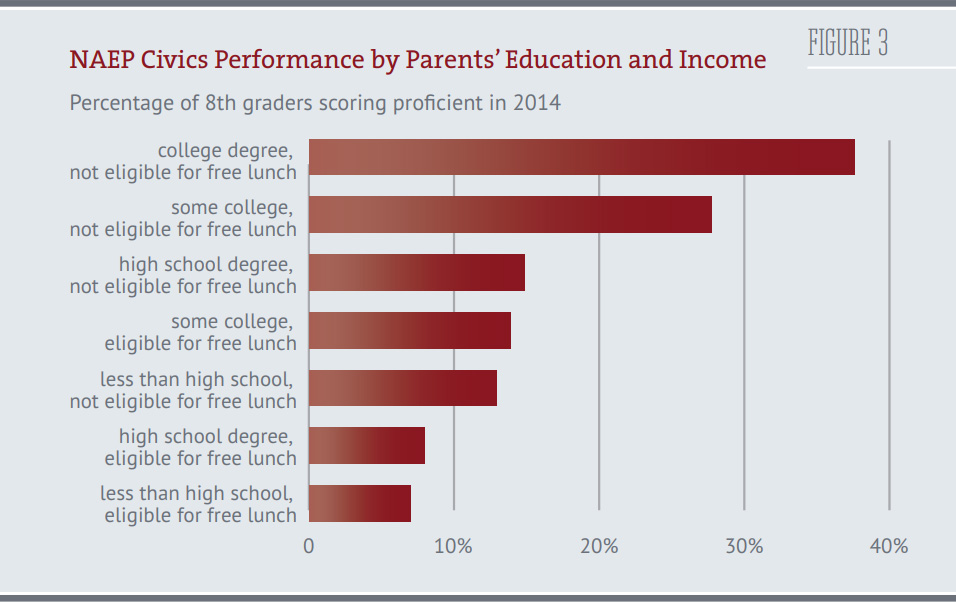 The report raises other inequities, such as the fact that, in the 2016 election young people without college experience were 20 percentage points less likely to vote than their peers who attended a higher-education institution.

These disparities pose challenges because, “unless people with diverse backgrounds and experiences become decision-makers, we cannot have just or wise policies,” say the authors. “Failing to provide all citizens with the skills and knowledge they would need to count equally in the democracy would be an unacceptable outcome.”

What is not in doubt is that civics must be different in the 21st century.

Kawashima-Ginsberg and Levine summarize existing evidence regarding school and instructional practices which show promise in creating foundational civic skills and experiences for all youth. These practices include school-level efforts to support student voice and the creation a school climate that prioritizes inclusion. Promising classroom civic practices are a mainstay in civic education reform, but are not distributed equally. These include discussion of current and controversial issues, simulations and the emerging area of action civics.

The white paper outlines several recommendations for shifting civic education practice into the 21st century. These recommendations are based on both research and recent statewide efforts to support implementation of new civic education policy in Florida and Illinois. In both states teacher professional development is and has been critical to change in the field. In Florida, research-based classroom practices have been associated with enhanced civic outcomes.

The full white paper can be found here. Democracy at the Crossroads was co-hosted by iCivics, the Campaign for the Civic Mission of Schools, the Lou Frey Institute of the University of Central Florida and the Jonathan M. Tisch College of Civic Life at Tufts University.