We estimate that turnout was even higher in battleground states, and that young people's support for the President was key to his reelection.

Note: The following analyses were written in the hours and days immediately following the 2012 presidential election and reflect the best available data and estimates at that time.

CIRCLE is estimating that 50% of young people (ages 18-29), or approximately 23 million youth, voted in the 2012 presidential election. This estimate, based on national exit polls, demographic data, and current counts of votes cast, is an update of our initial estimate of 49% calculated the morning after the election.

Young people (ages 18-29) represented 19% of voters in the election, and they represent about 21% of the voting-eligible population, according to CIRCLE’s analysis of Census data. President Obama won the majority of youth votes over Governor Romney by 60% to 37%, according to the early released National Exit Poll (NEP) conducted by Edison Research. This is one point higher than in 2008, when young voters represented 18 percent of voters in the presidential election, according to the NEP. (Note that early National Exit Poll data are subject to reweighting.)

“The role young people would play during this election has been a major question in American politics for over a year, and it seems the answer is that they have been as big a force at the polls in 2012 as in 2008,” said CIRCLE Director Peter Levine. “They again supported President Obama, although not as lopsidedly as in 2008.”

The chart below highlights the difference between turnout and share. The youth share (percentage of voters who are young) has stayed steady since 1996 as more people of every age have voted. Youth turnout, on the other hand, has grown consistently, with half of all 18-29 year olds voting in the 2008 election.

Young voters favored Obama by a 24-point margin. That represented a somewhat narrower margin than in the 2008 election, in which Obama took 66% of young voters. Before 2008, in elections from 1976 through 2004, young voters diverged by an average of only about 2 percentage points from the popular vote as a whole. 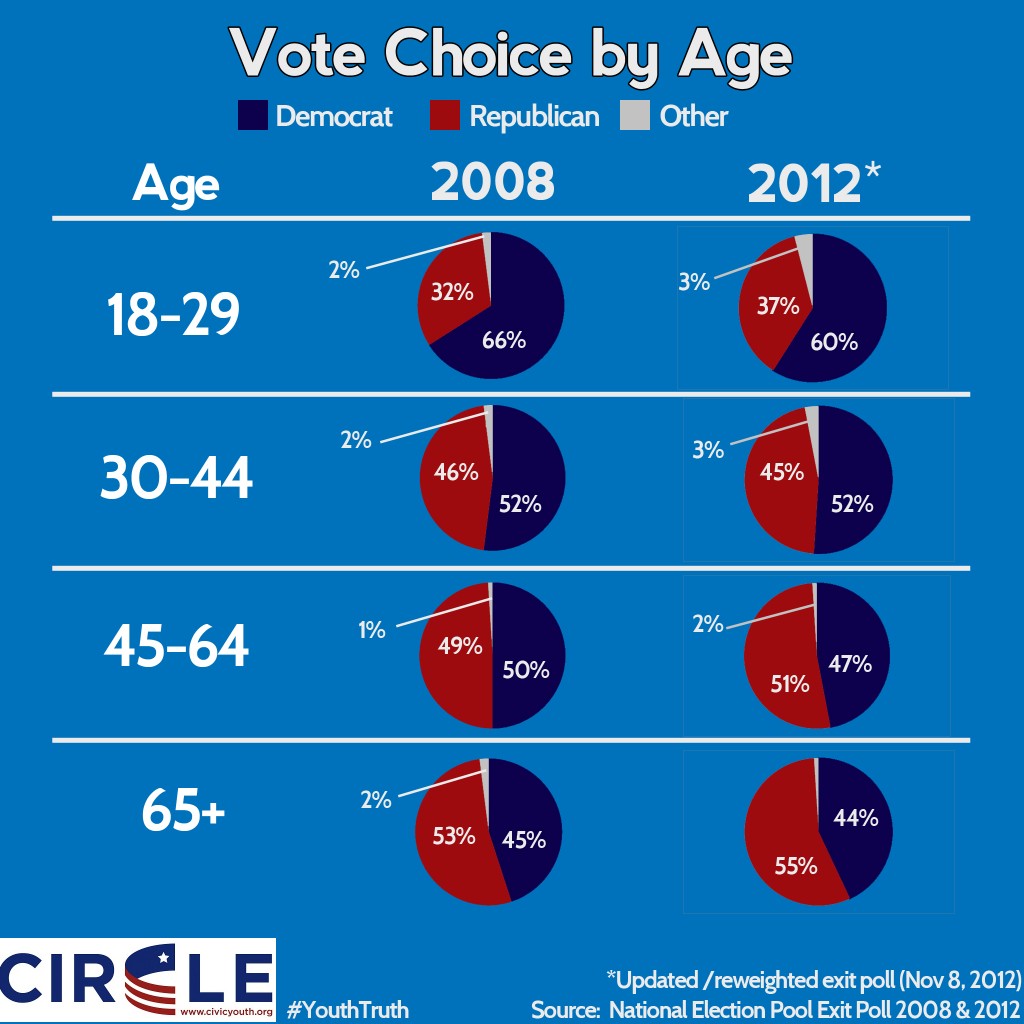 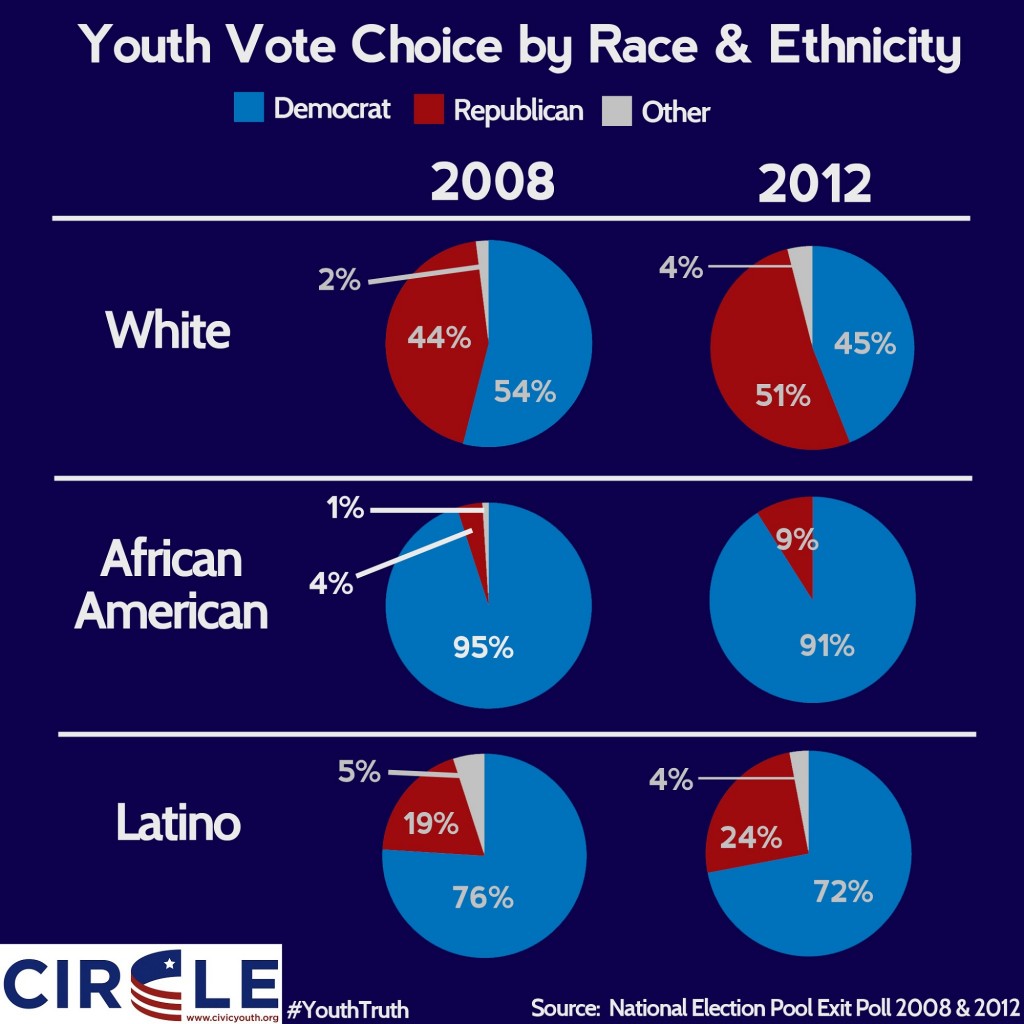 Research on youth electoral participation has often shown that young people are more likely to turn out to vote when asked by someone in their close network, or when contacted by campaigns and civic organizations. Using pre-election predictions for the competitiveness of states, we’ve estimated youth voter turnout for “toss-up” states (i.e. those where pre-election polling showed a virtual tie), states where pre-election polling showed one candidate with a small lead, and “non-battleground” states.

The 2012 election results show once again that youth respond to increased activity. Our estimates of youth voter turnout in pre-election toss-up states is 58%. In states that leaned one direction pre-election, youth turnout was 55%, and in non-battleground states youth turnout was 47%. This increased turnout in battleground states is likely the result of investment in youth outreach by campaigns and youth-focused organizations in these states, and it is directly related to the President winning reelection.

In four swing states (Ohio, Virginia, Pennsylvania, and Florida), young voters were essential to the President’s victory. In those states, if Governor Romney had won half of the youth vote, or if young voters had stayed home entirely, then Romney would have won instead of Obama. Those states represent 80 electoral votes, sufficient to have made Romney the next president.

In 2008, the youth vote likewise made the difference for Barack Obama in Indiana, North Carolina, and Virginia—meaning that if you subtracted all the under-30 votes, the states would have flipped from blue to red. 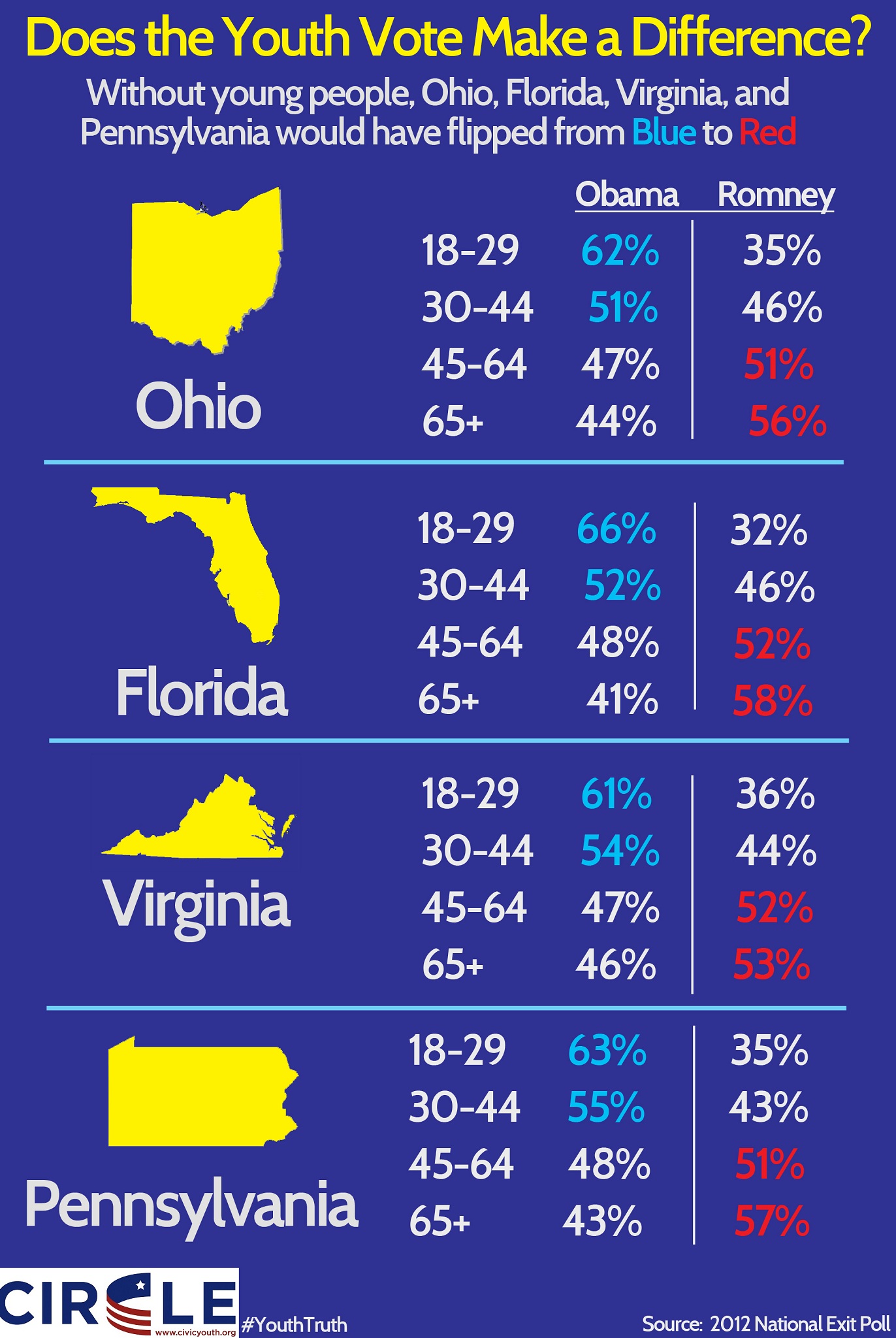