From News Attention to Action: A Key Role for Civic Organizations

Media can play a key role in young people's civic development and engagement, especially when civic organizations give youth opportunities to turn information to action.

The CIRCLE Growing Voters report introduces a paradigm-shifting framework to transform how communities and institutions prepare young people to become active and informed members of the electorate: to start growing them into voters long before they turn 18. Based on CIRCLE’s two decades of research, the framework underscores that the pathways to civic learning and action must be as diverse as youth themselves, and that multiple stakeholders and influences in young people’s lives have a critical role to play in their development into voters.

One of those key influences is the media, and in recent years CIRCLE’s research has highlighted the important role of youth media creation in civic engagement, and how various forms of media can influence young people’s “meaning-making” about civic and political life. Both rely greatly on young people’s local contexts: for example, their access to technology like broadband internet and the social dynamics that can help youth connect information and action. By better understanding young people’s media ecosystems, journalists and media organizations can make programmatic decisions that support young people learning about elections, finding their voice, and participating in democracy.

To more clearly understand the social and environmental factors that play a role in the relationship between information and civic action, we examined survey responses from 735 youth (ages 18-24) from the John S. and James L. Knight Foundation’s 100 Million Project. This research was partly made possible by and with funding from Knight Foundation and the MacArthur Foundation. We found:

Knight Foundation and the 100 Million Project

The John S. and James L. Knight Foundation are social investors who support a more effective democracy by funding free expression and journalism, arts and culture in community, research in areas of media and democracy, and in the success of American cities and towns where the Knight brothers once published newspapers.

The 100 Million Project surveyed 12,000 chronic non-voters nationally and in 10 swing states, soliciting their views, attitudes and behaviors on a wide range of topics. For comparison purposes, a group of young eligible voters (18-24 years old) was also surveyed, and that is the population being studied in this analysis.

Young people are active in creating and sharing content online that expresses their thoughts about political and social issues, and many feel more confident and informed about those issues when they create media. Youth engagement with media is also not limited to social media. Contrary to some common narratives about youth disinterest in news, most young people are exposed to local news media: 90% of youth (18-29) report reading or watching local news recently, and most found it helpful in preparing them to vote in the 2020 election. Youth of color in particular find local news to be helpful, and they’re also especially active in creating and sharing content online about issues they care about. Though our research has found that online forms of engagement often translate into “offline” actions like voting and participating in protests, the factors that inform this relationship have not always been clear.

Although research points to a positive relationship between news attention and civic engagement (Ksiazek, Malthouse & Webster, 2010; Edgerly et al., 2018), there is a misconception that engaging with media directly causes civic engagement (Boulianne & Theocharis, 2020). Even when the underlying factors that link news to civic action are considered, these connections are largely assumed to be digital and unrelated to place—a possible result of the nationalization of politics, the decline of local news, and the rise of social media.

However, the relationship between information and action as described in the research is often much more complicated. Gil de Zúñiga, Jung and Valenzuela (2012) have found that the relationship seems to flow both ways. It's important, then, to understand the factors that affect the direction and strength of the relationship. For example, patterns of civic participation are not equal across all people who encounter news; the intentionality with which young people seek out news may affect whether and how they participate (Ksiazek, Malthouse & Webster, 2010).

Other research has suggested that a young person’s sense of political efficacy (Park, 2019), their civic knowledge and awareness (Boulianne, 2016), and the platform they use to consume news (Moeller, Kühne & De Vreese, 2018; Shehata & Strömbäck, 2021) may play a role in the relationship as well. Additionally, research also suggests that civic development is often influenced greatly by the social networks that youth have both online and face-to-face: people like family, households, peers, teachers, and youth workers. In particular, discussing political ideas with family and peers seems to play an important role in facilitating the link between news consumption and participation (Klofstad, 2007; Lee, Shah & McLeod, 2012; Park, 2019).

Our analysis of Knight Foundation data found that a young person’s individual social context indeed appears to play an important part in facilitating the relationship between their information use and the civic actions they take. Overall, youth (ages 18-24) who had high levels of news attention and who used social media for civic purposes were more likely to take direct action, and their membership in civic organizations strongly explained much of this relationship.

In this survey, participants were asked to rate the level of attention they pay to news on a scale of one to four. Our analysis revealed that for each successive unit on the scale, the likelihood that participants would collaborate on solving problems in their community increased by 1.59 times. In other words, the more closely youth paid attention to the news, the more likely they were to engage in community problem solving. The same is also true for other forms of engagement. The likelihood of donating to charity increased by 1.26 times for youth who paid closer attention to news, and the likelihood of being registered to vote increased by 1.26 times for these youth. Likewise, youth who said they had posted their thoughts on political or social issues online or encouraged others online to take action on a political or social issue saw similar gains in their civic engagement outcomes.

For example: young people whose families discussed the news at home when they were growing up were more likely to give to charities as young adults. In this case, though, membership in civic organizations was still a key link. That is, young people who had access to a family context where there are discussions about issues happening in the world may grow up to value making charitable contributions; and, access to civic organizations may be providing youth with specific avenues for giving. 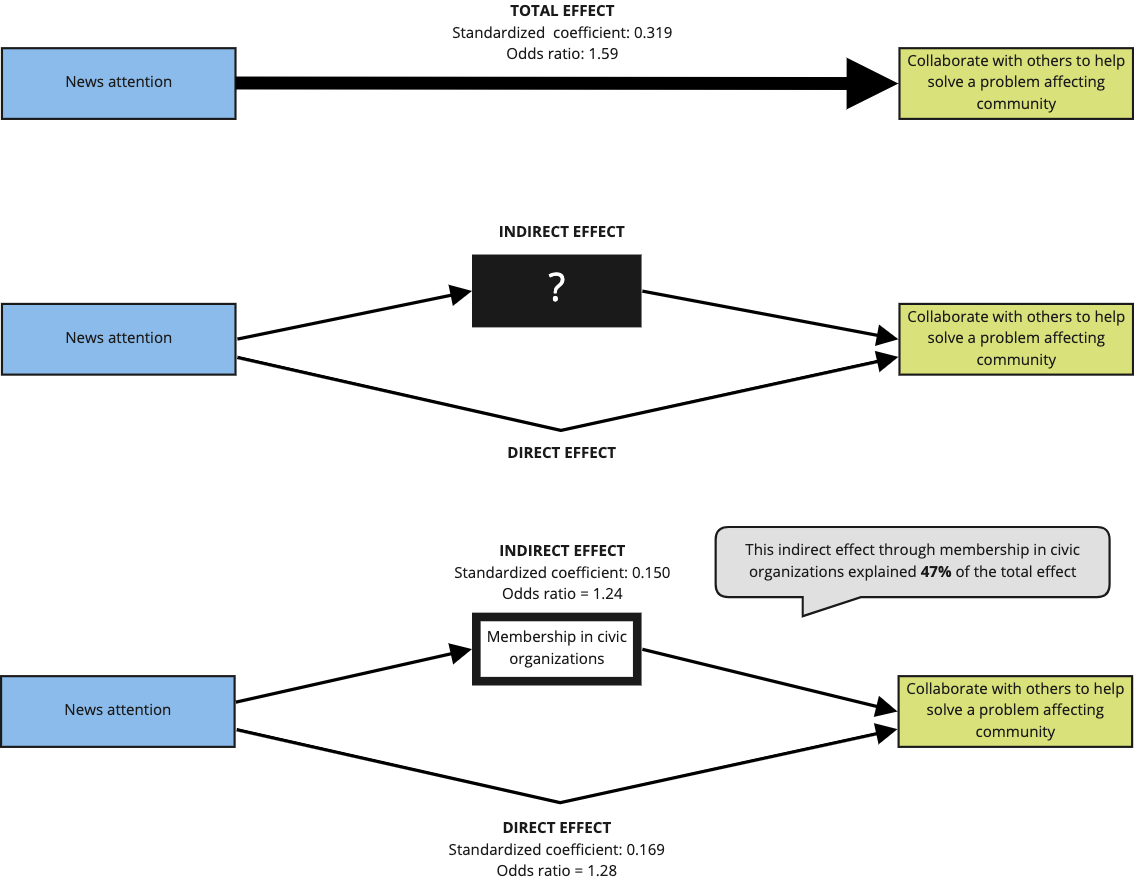 Our results are in line with previous findings that have highlighted the importance of discussing civic and political issues in facilitating the link between information and action. Civic organizations can offer space and opportunity for young people to engage in discussions about the news they are seeing or the posts they are creating, and this could be why membership in civic organizations explains the link between the media use and action. We know from past research that young voters, and especially those newly eligible to vote, find local news helpful in preparing them for elections. Our new research quantifies the ways that civic organizations have an important part to play in that preparation. This means that it’s important to ensure that young people who pay attention to the news have access to civic organizations that can help them turn their news attention to actions like registering to vote, and civic organizations should also provide youth with access to and information about voter registration.

It’s important to note that the relationship between media attention/creation, membership in civic organizations, and civic action is not necessarily a linear one that occurs in that order. For example, some young people who pay a lot of attention to the news may use what they learn to become involved in a civic group that gives them opportunities to take action on political and social issues. But others may become more inclined to pay attention to the news because of information they receive from a civic organization. In this way, civic organizations may act as news sources in their own right, providing information about particular issues or areas of concern to their members. In fact, data from the CIRCLE Growing Voters report found that, in 2020, more than a third of youth reported hearing or learning about the election from a community group. Still other young people may engage with the news or be inspired to join a civic group to increase the effectiveness of actions they are already taking in their communities.

Lessons for Media Outlets and Organizations

Our findings make it clear that civic groups play an important role in the path between information and civic action, which has important implications for both organizations and media outlets. If civic organizations are providing vital support that allow young people to more fully participate in civic life, then news outlets should look for ways to strengthen their relationships and collaborations with local civic groups. They can do this by:

Furthermore, if civic organizations are acting as a link between information and civic action, then it’s imperative that youth not only be provided with opportunities to join such organizations, but that those organizations provide their youth participants with pathways to turn their membership into action. Organizations can lean into their role as information brokers by:

Our findings highlight the interconnectedness of different aspects of a young person’s media ecosystem and the need for a more holistic approach to cultivating youth civic engagement. Although following the news and using media to uplift one’s own voice are sometimes understood to be inherently civic acts, understanding that community institutions can strengthen the relationship between media use and civic actions can help us support youth in their individual contexts and create stronger pathways to civic engagement for a greater diversity of youth.

The CIRCLE Growing Voters shares key findings about how media organizations and community groups can engage youth as stakeholders and participants in democracy—and how they can do better. Explore our recommendations for both fields.