Many sectors of society must play a role in increasing youth voting and participation in democracy, and they can employ varied strategies to drive engagement. Different stakeholders will approach these efforts with diverse goals: some want to improve equity in civic participation, others to build a broad base of political power, and others still simply to win the next election.

CIRCLE’s Youth Electoral Significance Index (YESI) is a valuable tool for any individual, campaign, organization, or institution that seeks to increase youth political engagement. The index provides a data-driven ranking of the top 10 Senate, top 10 Governor, and top 10 House races where young voters have the highest potential to influence the results of the election. The YESI can help stakeholders identify places where additional efforts and resources to turn out the youth vote could be decisive. It can also be a tool for equity and broadening engagement, if efforts focus on reaching those not yet engaged in the top-ranked locations.

We calculate and update YESI every two years for each federal election. The 2018 YESI is here; the 2020 YESI is coming soon!

How Do We Rank the Races?

Because young people have the biggest potential to decide an election when it’s projected to be close, competitiveness is a major factor in our Youth Electoral Significance Index (YESI). Thus, for the 2018 YESI, our Senate and Governor’s Top 10 featured primarily two types of races: those with a vulnerable Democratic incumbent in a state Donald Trump carried in 2016; and elections for open seats following a sitting senator’s retirement/resignation, or a sitting governor who is prevented by term limits from running again or has otherwise decided not to seek reelection. These races, like all competitive elections, are invaluable opportunities to drive especially high levels of interest and engagement from young voters.

However, along with competitiveness, the index takes into account important additional data that makes each state more likely to be ranked highly. This includes facilitative state election laws such as automatic voter registration and pre-registration for youth under 18, large youth populations, historical youth turnout and vote choice, and the presence of a considerable number of institutions of higher education, since campaigns often rely on colleges and universities to reach many potential young voters in one place. You can read more on the data and methodology here. 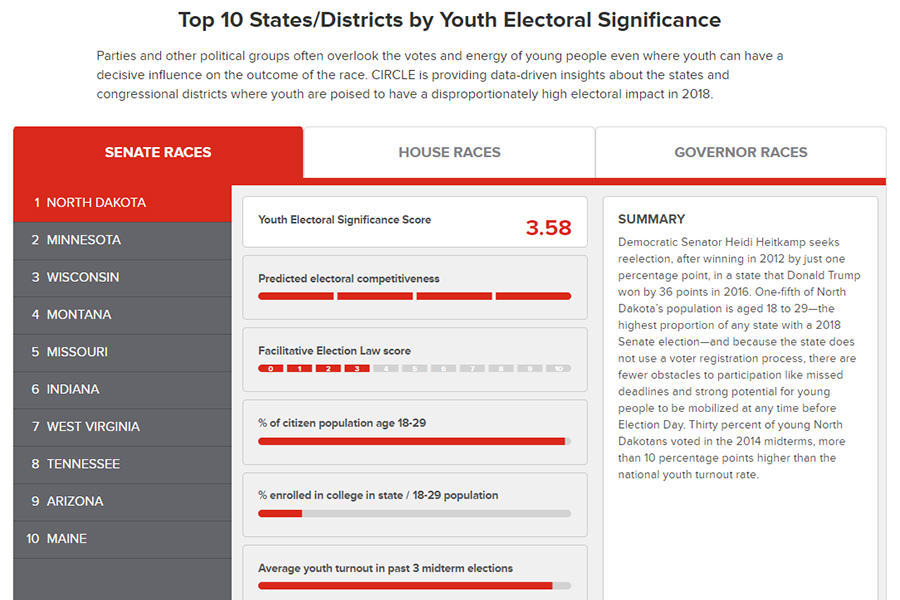 While the online YESI tool allows you to explore the top 10 House races, young people can have a profound impact on dozens of Congressional elections. In 2018, we expanded our ranking of House races to the top 50.

These 50 districts crisscross the nation—from Maine, to Texas, to Washington—highlighting that young voters’ possible electoral power is not confined to a few battleground states or a specific region of the country. However, several states stand out because they have multiple districts in the top 50.

California, which has the most Congressional districts in the nation, also led with eight 2018 House races in the top 50, which underscored the competitive nature of several elections in what is usually considered a safely “blue” state. Minnesota, which could be considered the top overall state across all our YESI 2018 rankings (1st in gubernatorial, 2nd in Senate) had five of its eight congressional districts in the top 50—four of which are in the top 10. New York has four top-50 districts, while Iowa, Illinois, New Jersey, Texas, and Virginia all have three.

It is important to note that, due to recent redistricting, races in Florida and Pennsylvania were not included in the 2018 YESI rankings. However, we certainly expected young people to have high electoral significance in several elections in those states.

The YESI can help stakeholders who care about young voters to identify where attention and resources can have a significant impact. It can also be a tool for equity and broadening engagement, if efforts focus on reaching those not yet engaged in the top-ranked locations. We hope that the Youth Electoral Significance Index continues to be a useful tool for campaigns, organizations, and others —and to convince those who have not paid much attention to young voters that they are a powerful electoral force.

In addition to the online data tool, we published a report with details on each top-10 race and a full accounting of the methodology and data sources behind the Index.