Note: We updated our Youth Electoral Significance Index, including our House rankings, in August. Find the new rankings here.

Elections are ubiquitous opportunities for young people to engage in civic life, and for campaigns and organizations to bring them into the democratic process. They are also opportunities for a diversity of young people to shape politics and policies with their votes, especially at the state and local level where key races are often decided by just a few percentage points.

CIRCLE’s Youth Electoral Significance Index (YESI) quantifies this electoral potential to engage a wide range of youth by using various data to rank races where young people are especially likely to decide the outcome—if institutions and communities reach out and engage them. Following our earlier release of the top-ranked Senate and Governor races, we’re now sharing our YESI rankings for 2022 House races. 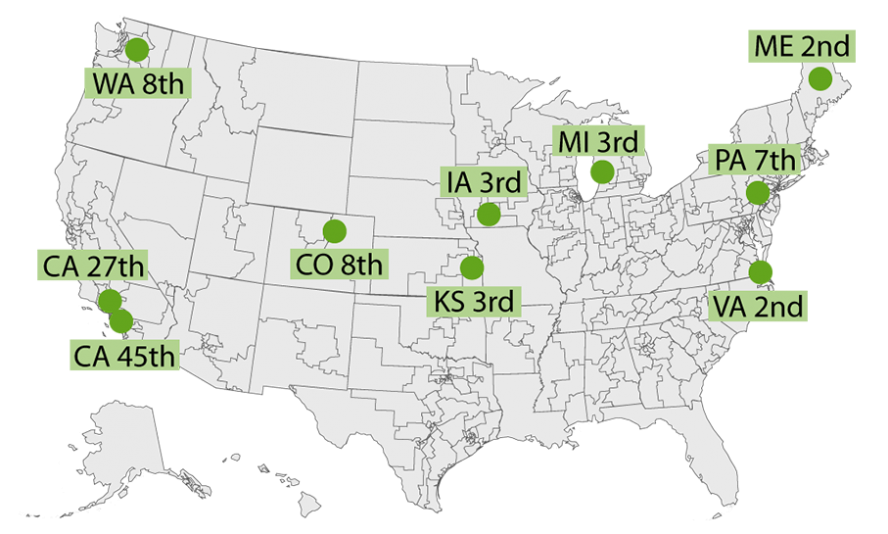 Our top 10 YESI House races have a few things in common. All are expected to be highly competitive races. Eight of the 10 seats are currently held by Democrats, including two (IA-3 and ME-2) that sent a Democrat to Congress in 2020 even as a majority of voters there supported former President Trump. Only the Michigan 3rd is currently held by a Republican, and the Colorado 8th is a brand new district after reapportionment.

Most of the districts are also in states like Washington, California, Colorado, and Virginia, that have many facilitative election laws like automatic, same-day, or pre- voter registration. Our research has consistently found that these policies can lead to higher youth voter participation. Indeed, in eight of these top 10 districts, youth voter turnout was above the national average in the 2020 election. In the top-ranked Washington 8th, it was a full 20 percentage points above average: 71%

Beyond their similarities, these top-ranked districts are notable for their diversity, which underscores that young people can have a decisive impact on elections all across the country. These top 10 races go coast to coast: from urban districts in Southern California, to districts in traditional Rust Belt battleground states like Michigan and Pennsylvania, to a rural district in the easternmost part of the country.

The YESI top 10 House districts are also remarkable for having diverse populations: in 8 of the 10 districts, more than 1 in 4 residents are people of color. That includes districts with heavily Latino districts like the Colorado 8th and California 27th, and the substantial black population in the Virginia 2nd. That means there’s massive potential for young people of color to play a critical role in the 2022 midterm results. It may also mean campaigns, organizers, and other stakeholders must be thoughtful about strategies and tactics—especially to support those from historically marginalized communities who may disproportionately face barriers to electoral participation.

If we broaden our view to the top 25 YESI House districts, there is even more variety and diversity. There are 15 different states represented in the top 25, which includes four districts each in California and Michigan, three in Pennsylvania, and two each in Illinois and Virginia.

Some other notable districts in the top 25 include the California 22nd and New Mexico 2nd (#11 and #12, respectively, in our ranking), where more than half of the population is Latino; and the New Jersey 7th which had one of the highest youth voter turnouts of any district in the country in 2020.

It’s critical for campaigns and other stakeholders to understand young people’s extraordinary potential to decide elections, and dedicate the appropriate attention and resources to reaching young voters. It’s also key to understand the vastly different communities of youth and conditions for engagement that exist in different states and districts.

Outreach to young people must necessarily be different in an urban, ethnically diverse district with a major college campus like the California 45th, than in the Maine 2nd in one of the most rural parts of the country. Likewise, facilitating youth participation requires different strategies in a state with automatic registration and easily mail-in voting like Colorado, than in a state like Pennsylvania without same-day registration or no-excuse absentee voting.

Note: Districts in Florida, Louisiana, Maryland, Missouri, New Hampshire, New York, and Ohio, which had not yet finalized their new Congressional maps at the time of this analysis, were not included in the rankings.