In more than half of states where data is available, there are more youth ages 18-24 registered to vote than in 2018. But the numbers among teens ages 18-19 are less positive.

With one week to go until the 2022 midterm elections, there are 6% more young people ages 18-24 registered to vote in the United States than there were in November 2018—based on the 41 states for which data is available. This new analysis of youth voter registration heading into Election Day is based on voter file data aggregated by Catalist and analyzed by the Center for Information & Research on Civic Learning and Engagement (CIRCLE) at Tufts University’s Jonathan M. Tisch College of Civic Life.

This data includes major increases in electoral battlegrounds where CIRCLE research suggests young people could influence election results. However, among young people who have newly aged into the electorate (ages 18-19), the number of registered youth is down 5% and most states lag far behind their 2018 numbers. 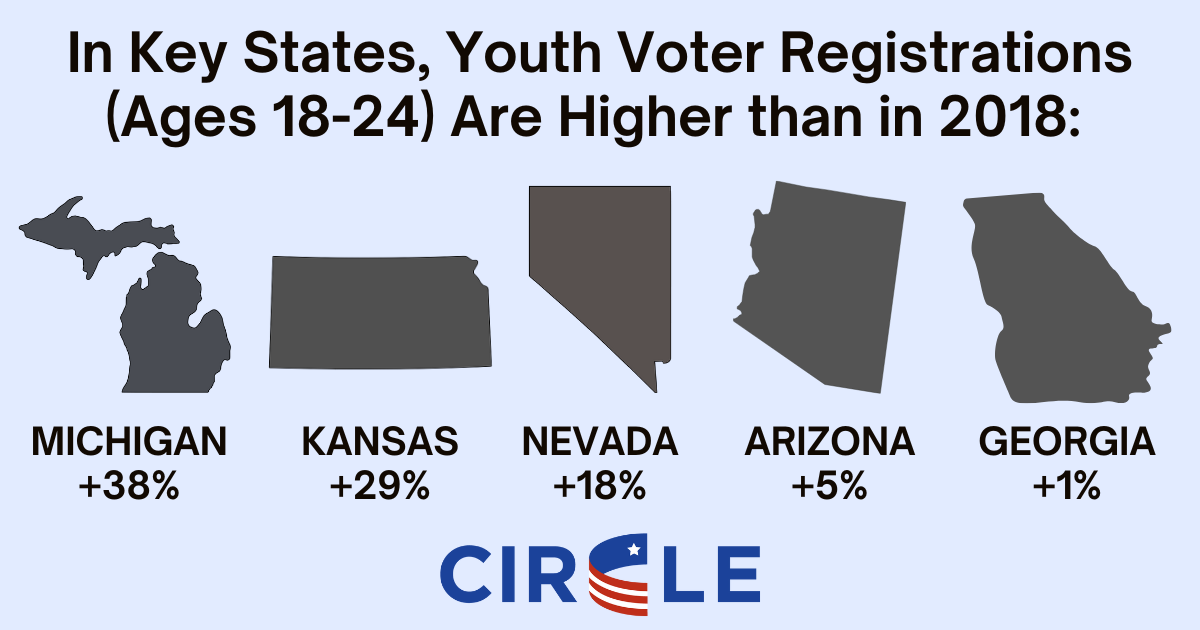 This pre-election snapshot compares current voter registration figures to 2018—a year with historically high participation that resulted in the highest youth turnout rate ever in a midterm election. That many states have exceeded or even come close to matching their 2018 registration numbers points to the potential for high youth participation in the upcoming election.

Major findings from CIRCLE's analysis include:

See the full data for both age groups below and scroll over a state to see its % increase or decrease.

The data above reflects by what percentage there are more or fewer voter registrations in a state now than in 2018—not percentage-point increases/decreases. The 2018 midterm elections featured the highest youth voter turnout in any midterm election since the voting age was lowered to 18, meaning that these 2022 registration numbers are being compared to an election year that featured a historically high level of youth participation.

In addition, while this analysis is based on the latest available data as of the end of October, the reseachers note that several states above have not updated their data since September (CA) or earlier (AL, AR, IN, LA, TN, VT, SC).

CIRCLE’s Youth Electoral Significance Index ranks the 2022 midterm Senate, Governor, and House Races where young people have the highest potential to influence results on November 8. The analysis finds that most highly-ranked states have more young people (ages 18-24) registered to vote now than they did in 2018.

When it comes to youth ages 18-19 who are newly eligible to vote, states where CIRCLE research suggests youth may influence the outcome like Michigan (+52%), Kansas (+42%) , Nevada (+23%), and North Carolina (+14%) have more young registrants now than in the previous midterm election. On the other hand, several electoral battlegrounds and states where youth could have a major impact have fewer age 18-19 registrants: Pennsylvania (-3%), Florida (-12%), Georgia (-23%), and Arizona (-24%).

Youth voter registration is also higher in several states where voters recently voted or will soon vote on abortion-related measures. That’s the case in Kansas, which has notable increases, and where voters defeated a constitutional amendment banning abortion in the August primary. It’s also the case in Michigan and California, where abortion is on the ballot on November 8.

Two major reasons for stark differences in voter registration between states and between age groups are electoral policies and electoral outreach. For example, the older age group (20-24) includes many young people who were contacted and registered before the 2018 and especially 2020 elections, both of which featured historic increases in youth voter turnout. Youth ages 18-19 had to newly register this cycle, and are often neglected by parties and organizations who rely on past or likely voter lists for outreach.

That said, automatic voter registration isn’t a panacea. In fact, several states that have implemented some form of AVR in recent years, including Virginia, Rhode Island, and New Mexico have youth voter registration numbers far below their 2018 levels among 18- and 19-year-olds. There can be significant variation in how election laws and policies are implemented, which can affect their effectiveness at improving youth participation.

In addition, 20 states and Washington, D.C., have some form of same-day registration which allows voters to register and vote at the same time. That includes states with highly competitive elections like Wisconsin, Nevada, and Michigan, where even more youth may register as they cast a ballot during the early voting period and/or on Election Day.

In the days and weeks following the 2022 midterm elections, CIRCLE will be sharing exclusive data on young people’s voter participation and impact on results. That includes election-night updates on CIRCLE's 2022 Election page, an exclusive, day-after youth voter turnout estimate on November 9, and in-depth analyses on the youth electorate.

Media Inquiries: CIRCLE experts are available before and after the election to discuss our research and share data-backed insights on young voters. Please contact circle@tufts.edu or alberto.medina@tufts.edu with any inquiries or requests.