Note: The following analyses were written in the hours and days immediately following the 2014 midterm elections and reflect the best available data and estimates at that time.

CIRCLE released its exclusive, revised two-day estimate of national youth voter turnout, which shows that at least 10 million young people (ages 18-29) went to the polls in Tuesday’s midterm elections — a youth turnout rate of 21.5%. The number of young voters in Tuesday’s election is comparable to the turnout seen in other, recent midterm contests.  In 2010, the two-day youth turnout estimate was 20.9%, or around 9.2 million young people. (Update: In the summer of 2015, using newly available data, we updated our 2014 youth turnout estimate to 19.9%, the lowest midterm youth turnout ever recorded. More here.)

In addition, preliminary exit poll data indicate that young people made up 13% of the voters in today’s elections, according to the early release of National Exit Poll (NEP) data conducted by Edison Research. It is important to note that preliminary national exit poll data are subject to adjustments (also known as “reweighting”) by the NEP; in 2010, the youth share was adjusted twice shortly after the election.

In a wave election for the GOP, youth still tended to vote Democratic. In the national exit poll data on House races, 18- to 29-year-olds preferred Democratic candidates by 54% to 43%. In many close Senatorial and gubernatorial races, youth preferred the Democratic candidate, and sometimes they were the only group that did (e.g., in Florida).

In other key Senate races, young people tilted more Democratic than older age groups, and there was often a pattern that Republican support grew stronger with each older cohort. For instance, in North Carolina, Sen. Kay Hagan (D) won the 18-29 vote with 54%, but Tom Tillis (R) won the 65+ vote with that amount of support. (However, Hagan had won 71% of the youth vote in 2008.) In Georgia, Michelle Nunn won the youth vote with 59%, but drew only 37% of the 65+ vote. In New Hampshire, Sen. Jeanne Shaheen (D) won all age groups, but the 18-29s were her strongest cohort at 58%. 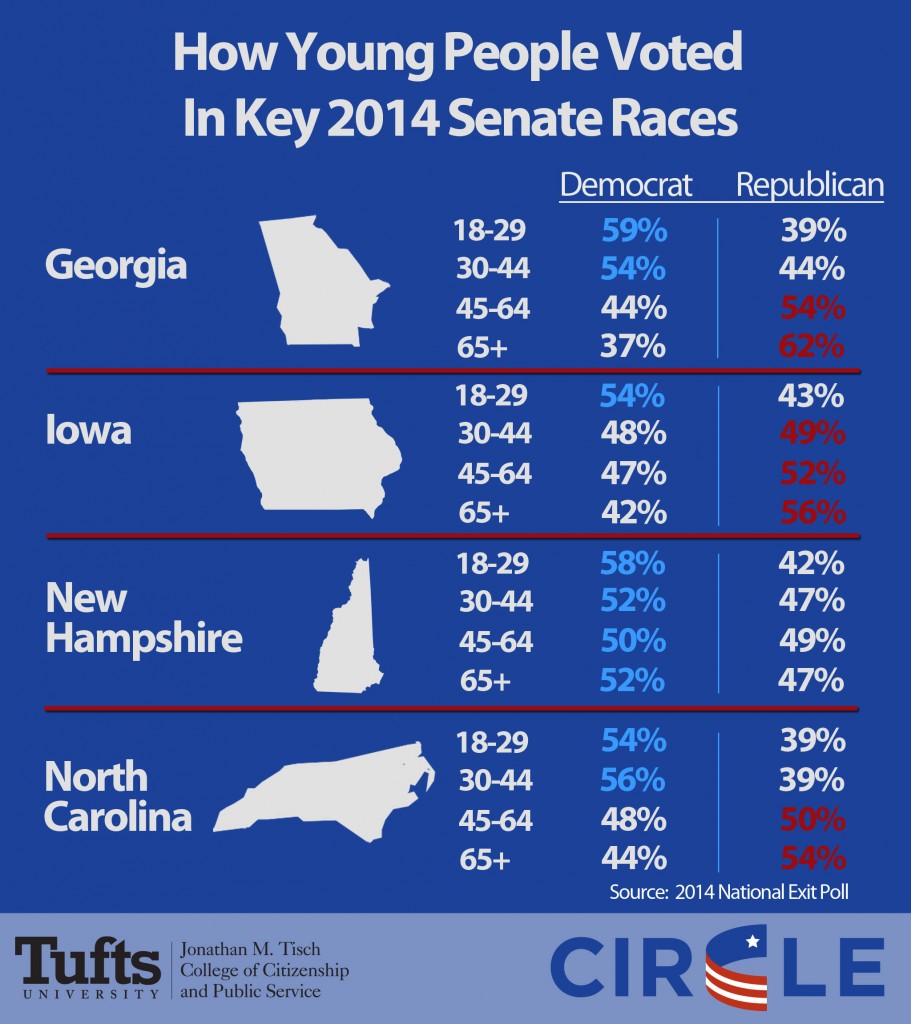 In terms of both turnout and vote choice, 2014 seems quite typical of a midterm year as far as youth are concerned. Young people made up a similar proportion of voters, and with some exceptions, were more likely to cast ballots for Democrats in tight races.

However, the Senate class of 2008 was not elected in a midterm year. They were elected in 2008, an exceptionally strong year for Democrats, when youth support for Barack Obama set the all-time record in presidential elections. The change from an extraordinary presidential year to a rather typical midterm year hurt the Democratic Senate incumbents. Their advantage among youth voters shrank compared to 2008 in some key states, such as North Carolina (down from 71% in 2008 to 54% in 2014) and Virginia (down from 71% to just 50%). And in some states that had been expected to be competitive this year, the Republican Senatorial candidate won the youth vote along with all older groups–Arkansas and Alaska being examples.

For Republicans, the lesson is they can be competitive among younger voters, although nationally, they still lag behind with that group, and in some states, the Democratic tilt of young voters may pose a problem in years to come.

For Democrats, the message must be to re-engage with young people, who had provided more support in 2008 Senate contests.