Our day-after estimate found that 31% of young people cast ballots in the 2018 midterms, overwhelmingly for Democratic candidates

Note: Below you'll find analyses conducted by CIRCLE in the hours immediately following the 2018 midterm elections with the best available data at that time. In May 2019 we updated our estimate of youth turnout to 28%.

CIRCLE is estimating today that roughly 31% of youth (ages 18-29) turned out to vote in the 2018 midterms, an extraordinary increase over our estimate in 2014, when our day-after exit poll calculation suggested that 21% of eligible young voters went to the polls. We estimate that this is by far the highest level of participation among youth in the past quarter century—the last seven midterm elections during which we’ve been using this same calculation method. The 31% turnout estimate represents millions more young people casting votes in yesterday’s election, compared to who voted in 2014 according to our day-after estimate.

In addition, preliminary national exit poll data indicate that 13% of all votes cast in 2018 House elections came from youth ages 18-29. That number, the youth share of the vote, matches the 13% share in 2014 and is generally similar to the number in the last six midterm cycles since 1994; indeed, the youth share has remained relatively steady, between 11% and 13%, in all those previous elections.

The substantial increase in youth turnout is in many ways the culmination of an election cycle in which young people had an extraordinary impact through their activism, emphasis on voter registration, and—yesterday—overwhelming support for Democratic candidates. From the gun-control movement after the Parkland shooting, to voter registration on par with a presidential year and higher early voting, youth demonstrated newfound levels of engagement and enthusiasm that have historically been unusual in a midterm election. CIRCLE’s own poll of 18 to 24-year-olds found that 34% said they were “extremely likely” to vote—a similar rate to our estimate today. Our survey also found that youth were confident about their generation’s ability to effect change, and that many understood voting was an important way to advance their political views.

You can ready more about youth turnout and youth vote share here here. There are several sources of voter turnout estimates, all of which have benefits and drawbacks. For example, some of the estimates depend on data that are not available for months. CIRCLE’s day-after youth turnout estimate tracks well with the Census Current Population Survey (CPS) dataset—see graph above—and can be calculated immediately. CIRCLE has long interrogated all of these sources and, while they do not match exactly, they follow the same trends, which makes this an early indicator.

On an Election Day when the Democratic Party took back control of the House of Representatives, young people (ages 18-29) offered their candidates an overwhelming level of support. According to the preliminary national exit poll, 67% of youth cast their ballot for a Democratic House candidate, while 32% chose a Republican House candidate. That extraordinary 35 percentage point gap in support for Democrats over Republicans is about three times higher than it was in the 2014 midterms, when 54% of under-30 voters chose a Democrat, and 43% a Republican. It is, by far, the largest difference in vote choice among young people in the past quarter century.

Among young people of color, the support for Democratic candidates was even higher: 92% among African-American youth, and 80% among Latino youth. Meanwhile, white youth supported Democrats by a smaller margin than young people overall: 57% for Democrats vs. 42% for Republicans.

National youth vote choice as measured by the exit poll performs well against other national political surveys. The 2018 national youth vote choice closely mirrors the data from our pre-election poll of young people aged 18-24, which found that youth who said they were extremely likely to vote preferred a liberal candidate by a margin of 25 percentage points. In our survey, 62% of these extremely likely voters said they intended to vote for a Democrat or a progressive-leaning independent, and 37% for a Republican or a conservative/libertarian-leaning independent. Because, in most House contests, an independent candidate was not on the ballot, it’s probable that these preferences translated into support for a Democrat or a Republican.

Young voters particularly played a crucial role in several key statewide races during today’s midterm elections, several of which were still too close to call on election night. Young people can have a significant influence on elections, and especially on statewide races even when they don’t vote in extraordinary numbers because of differences in how youth have voted compared to other age groups. If their vote choice is combined with substantial participation their impact can be even greater. 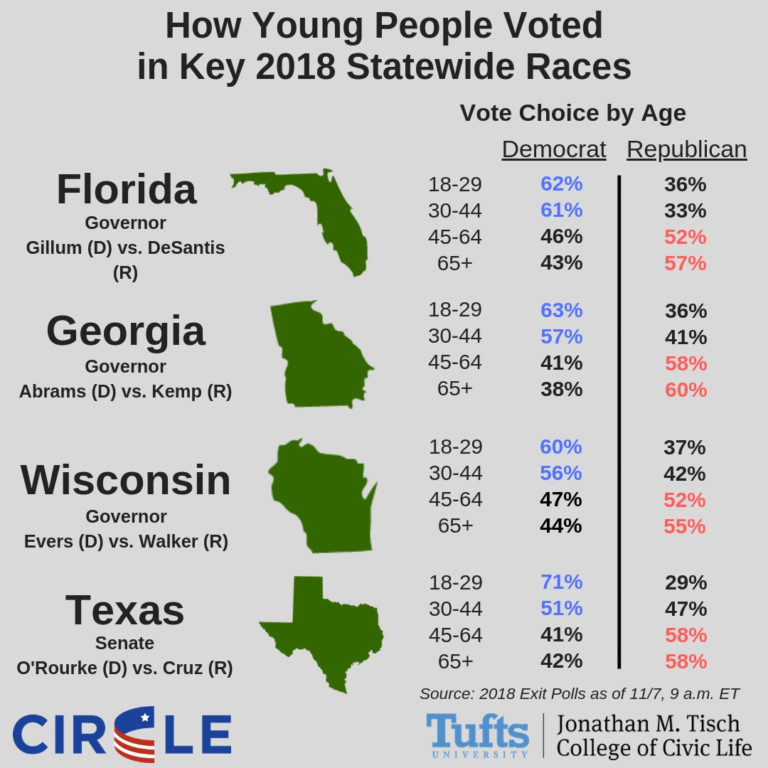