In the Democratic primary race for the Massachusetts 7th District, Pressley drew support from precincts with more youth and people of color.

The electoral engagement of young people—and young people of color—matters because their voices are essential to our democracy and because their votes can be particularly influential. Our Youth Electoral Significance Index serves as a predictive model for the races where young voters have the potential to swing the results, and we often conduct post-election analyses to understand how young people made their mark on particular races. A few primary races caught our attention this year, including the one in our “hometown” congressional district, the Massachusetts 7th, which encompasses parts of CIRCLE’s home at Tufts University.

We wanted to examine to what extent young voters may have contributed to Pressley’s electoral victory, and whether this is the latest race in which youth, and particularly youth of color, have helped candidates upend the party establishment. As we discovered, the data revealed very clear patterns:

The Massachusetts 7th, located in eastern Massachusetts, covers roughly half of Boston and some of its northern and southern suburbs. We aggregated precinct-level data for all towns in the Massachusetts 7th (except Chelsea, for which there was no precinct data available at the time of this analysis) using election results published by each town within the district. We also obtained voter registration data across all age brackets from Catalist, a voter file provider. For this analysis, we divided our sample of 251 precincts into thirds of about equal size using two characteristics: proportion of youth and proportion of people of color, in order to produce nine “types” of neighborhoods with high, moderate, or low percentages of youth/PoC.  Additionally, we combined the two in order to examine precincts with low and high proportions of young people of color.

Although Pressley beat Capuano in all neighborhood “types” we examined, we focused our analysis mostly on the “low” and “high” precincts, where the differences were stark. The share of votes for Pressley was in the low-youth, low-POC precincts was 51 percent, while in the high-youth, high-POC precincts it was 77 percent.  A precinct having higher proportions of youth OR people of color was also related to higher levels of support for Pressley—though not to the same extent. Focusing specifically on youth of color (YoC), we found that Pressley’s vote share in precincts with relatively high proportions of YoC was 74 percent. In precincts with few YOC, Pressley’s mean vote share was just 53 percent.

Young people made their mark on this race, not just by supporting Pressley, but by turning out to the polls in droves. Though all precincts reported more votes cast compared to the noncompetitive 2014 Democratic primary, precincts with higher percentages of young voters had larger increases in turnout. Moreover, there was a correlation between precincts with the largest increases in turnout and precincts with the highest support for Pressley, which suggests that new voters, many of whom are likely young, or those who returned to the polls after not voting in past elections, were more likely to back Pressley.

For example, Boston’s Ward 21, Precinct 2—home to Boston University’s Student Village—saw 400 percent more votes cast in this primary compared to four years ago, which dwarfed the median increase of 166 percent across all precincts. However, given that young voters across all precincts turned out to the polls at higher rates, it is likely that strong turnout from non-college youth bolstered Pressley as well.

To verify this finding, we also ran a multiple regression—a statistical procedure that allows us to examine the relationship among multiple factors at the same time. We found that the proportion of voters of color and the density of the youth population were both associated with greater level of support for Pressley. In other words, Pressley earned her 20-point margin of victory by winning precincts with more young voters and more voters of color. These favorable precincts were primarily located in Boston, Pressley’s home turf, but there were some exceptions like Milton’s 1st precinct (neighborhood adjacent to Boston, near the Mattapan MBTA station) and Cambridge’s 3rd precinct in Ward 3 (Central Square, a rapidly gentrifying area near MIT), where affordable housing—a key issue for Pressley—may have been especially on voters’ minds. (Pressley released her affordable housing policy one month before the election.) 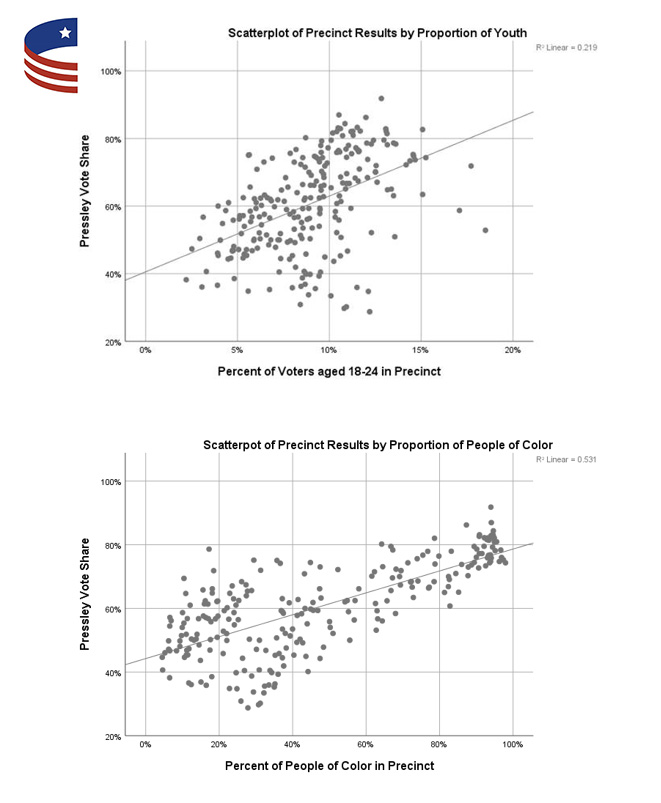