Bernie Sanders performed much better in places with a high concentration of college students.

Monday’s Iowa Democratic caucuses saw youth overwhelmingly support Senator Bernie Sanders, choosing him over Secretary Hillary Clinton by 84% to 14% and propelling him to a near-tie in the first-in-the-nation contest. Our analysis shows that Senator Sanders’ success is related to strong support from Iowa counties with sizable college student populations. That is evidence that young voters matter, but it raises the question of whether the Sanders campaign resonates with all youth (39% of Iowans ages 18-29 don’t have any college experience).

CIRCLE staff layered the results of Monday’s Democratic caucus in each Iowa county onto data about campus enrollment from the Integrated Postsecondary Education Data System database of the National Center for Education Statistics. (It is worth noting that while many students are ages 18-29, the data include students of all ages.) Of the 95 Iowa Counties that favored either Secretary Clinton or Senator Sanders—four were tied—Secretary Clinton won 59, but only seven of those counties (11.9%) have 2,000 or more college students. In contrast, Senator Sanders won in 27 counties, but 11 (30.6%) have 2,000 or more college students. 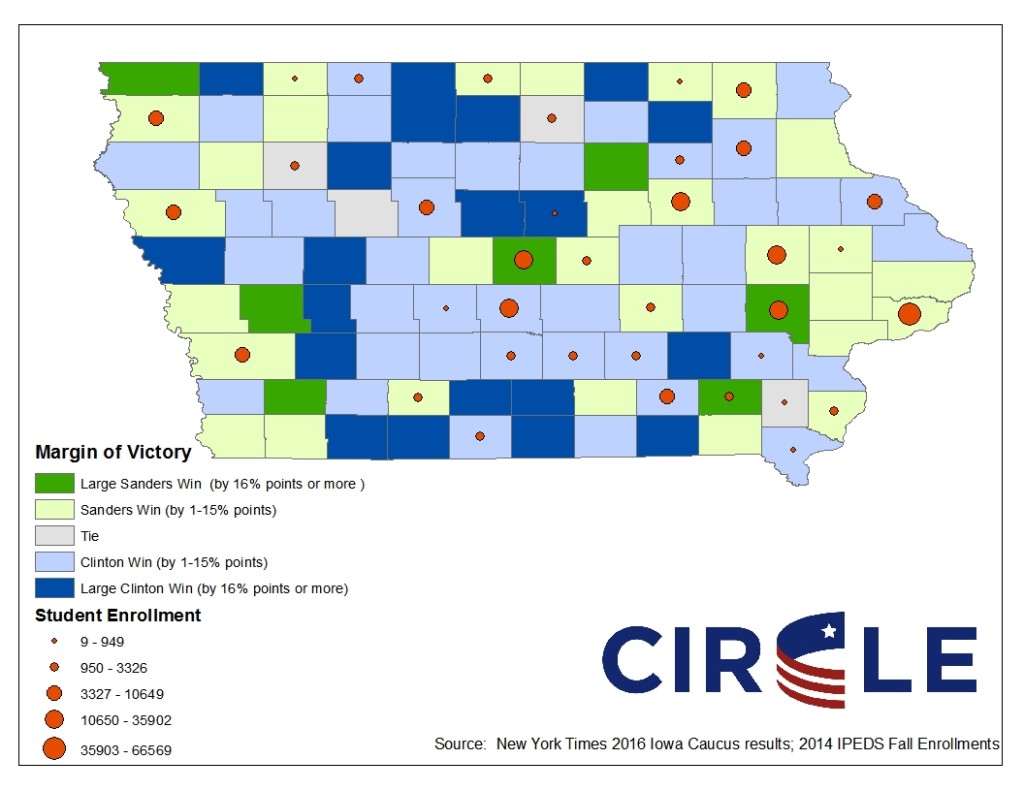 In short, while both Secretary Clinton and Senator Sanders drew support from college-heavy counties, Senator Sanders likely relied far more heavily on college students coming out to support him.

Political campaigns often target college campuses due to the ability to reach thousands of students at one time. These results suggest that the Sanders campaign profited from just that strategy. While student engagement is important to civic and political life, this strategy can also miss large numbers of youth, including the 40% of young adults nationally who have not attended college.

Campuses interested in increasing political learning and democratic engagement among students should take advantage of resources and research opportunities provided by our colleagues at Tisch College’s Institute for Democracy & Higher Education.