The youngest eligible voters (ages 18-19) tend to lag behind their older peers, highlighting the need for efforts to engage them in democracy.

With the 2018 elections now less than a year away, political parties, journalists, and other observers are increasingly turning their attention not just to how people will vote in the midterms, but to how many will cast a ballot. Turnout in off-year elections has historically been much lower than in presidential years across all age groups, but especially among youth; in 2014, we calculated that only one-fifth of young people (ages 18-29) participated in that year’s midterm elections—the lowest youth turnout ever recorded by the Census.

While many cite this downward trend in order to dismiss young people as apathetic, the research tells us that there is a deeper story. Voting is like any other habit: it must be taught, facilitated, and nurtured through concrete opportunities and through a culture that encourages and celebrates political participation. And like most habits, the earlier one develops it, the easier it is to keep at it later in life. Research has shown that young people who cast a ballot earlier in life are more likely to continue voting in the years and decades to come. 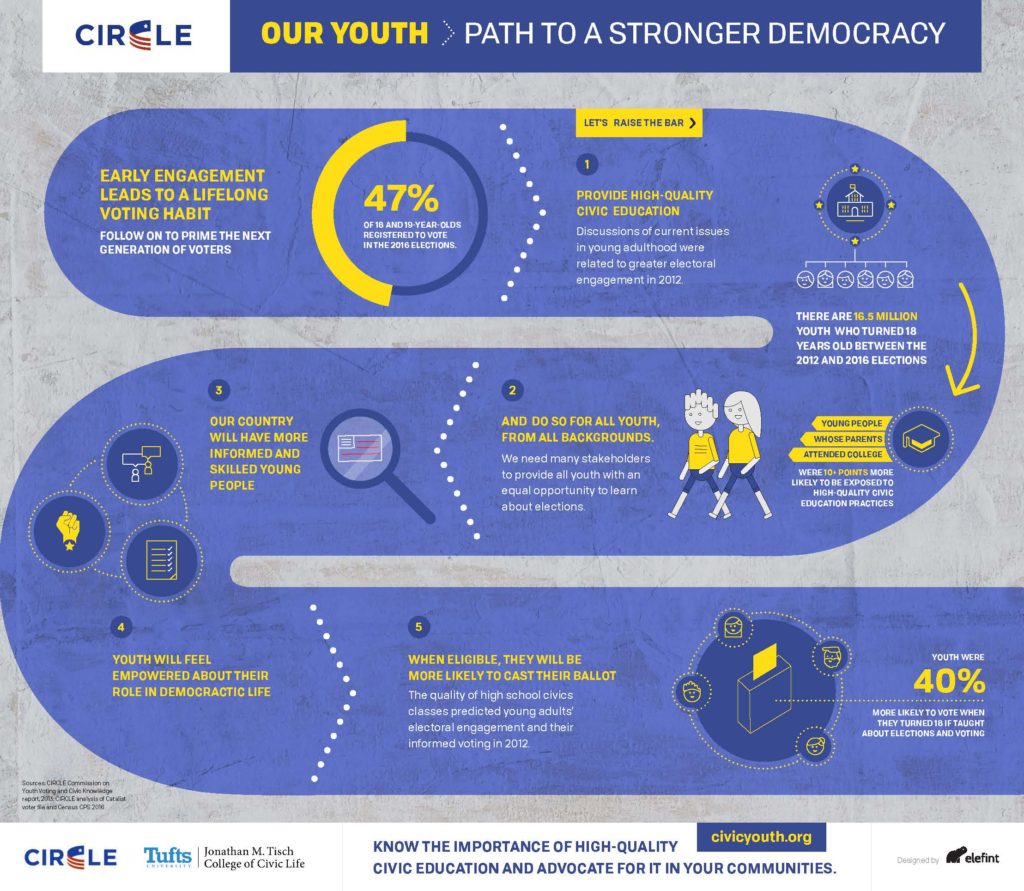 It’s important, then, to pay special attention to the unique facets—both impediments and opportunities—of political engagement by the youngest of young people, 18 to 20-year-olds. And we should start with a recognition that the work to prepare these youngest potential voters for civic life must begin years before they’re eligible to go to the polls.

The ‘Youngest’ Youth Lag Behind

Data from our recent polls and analyses highlight some of the challenges facing this youth subgroup (18 and19-year-olds), even compared to their older peers in their mid-to-late 20s. For example, despite the extraordinary level of public attention on the 2016 election, less than half (47%) of 18 and 19-year-olds were registered to vote last November, compared to 58% of all young people ages 18-29. In terms of overall voter turnout, 37% of youth aged 18 or 19 voted, significantly lower than the 46% of all young people under 30 who actually cast a ballot.

Taking educational attainment into account further illuminates why it’s necessary to start preparing youth for political participation as early as possible. Among 18 to 29-year-olds without a high school diploma, less than a third were registered to vote and one-fifth cast ballots—both of these rates are about 15 points lower than for young people who finished high school. These major gaps begin early, as we see in data regarding 18 and 19-year-olds’ participation in 2016. Those 18 and 19-year-olds who are high school graduates or already have some college experience were more likely to vote in 2016. In other words, it is impossible to significantly increase youth turnout without addressing educational gaps among youth.

The 2016 November Supplement to U.S. Census Current Population Survey provides some insight into why some of these youngest potential voters did not participate in the election. Among youth 18 and 19 years old who were not registered to vote, 23% said they missed the registration deadlines, 6% said they didn’t know where or how to register, and 3% said their vote “wouldn’t make a difference.” Over a third (38%) indicated they were not interested in the election or not involved in politics. This accounts for an estimated 14 million voters.

These responses underscore that interventions to increase electoral engagement have to address two distinct types of obstacles On the one hand, there is a lack of information about when, where, and how to register which may be compounded by technical barriers like restrictive voting laws. On the other hand, there are efficacy-related barriers that speak to young people’s understanding—or lack thereof—of their value and role in democratic life. That same poll showed that a majority of 18 to 20-year-olds agree or strongly agree that “I don’t think public officials care much what people like me think,” and far fewer believe that “people like me have a legitimate voice in the political process.”

One of the most important tools for preparing young people to be informed and engaged voters is k-12 civic education, which can reach a broad and diverse population. But to be most effective, civics must incorporate relevant knowledge and best practices like more interactive pedagogies, discussion of contentious issues, and news and media literacy. In that respect, most civics curricula fall far short. A 2016 analysis led by education researcher Paula McAvoy (University of Wisconsin Madison) found that only 10 states’ civics curricula mandate that students learn the relationship between controversial issues and political parties, and only one state comes close to requiring that students understand where their own beliefs fit within the ideological landscape.

Other important elements of these civics for the 21st century are particularly geared toward addressing teens’ often understandable skepticism that their political engagement would matter. Discussions and projects centered on issues they feel passionate about help students understand the connections between the things that matter to them and the political processes that shapes the world around them. Simulations like mock congressional sessions or elections allow teens to not just read about, but experience how a system that may otherwise seem distant and inaccessible actually works.

An increasingly crucial component of civic education is news and media literacy that helps youth navigate and put to use the deluge of information they may encounter, especially around elections. In order for news media to help facilitate or inform engagement, learning must not end with interpretation.

Young people are seeing political ads, even in places where they perceive few other resources and outlets related to civic and political engagement. In our pre-election poll, more than three out of four 18 to 20-year-olds had seen a political ad in the week before we surveyed them, and 41% had seen “some” or “a lot.” While television remains the primary medium for political ads, youth are also coming across them in social media, podcasts, and even video games, each of which presents new challenges for conscientiously consuming information. For example, one-third of young people, ages 18-20, encountered news and information about the election while doing other things (what researchers call incidental exposure) on at least three days during the week they were polled. This means youth are increasingly exposed to political messaging during moments when they cannot necessarily carefully consider what they are seeing and hearing.

Without guidance and opportunities to make sense of and discuss information, all of these elements may contribute to the fact that young people are unsure whether and which information to trust. Only 29% of 18 to 20-year-olds said that they believe the news is “made for someone like me.” A strong, explicit focus on media literacy as part of civic education can help combat these trends and support youth voice at a time when the media landscape will only get more fractured and complex.

Our research highlights that these and other interventions are especially critical for the youngest of young adults.

We must continue to support practices like pre-registration efforts to reach young people who do not finish high school or are disconnected from large institutions. This should include more studies both on the best ways to connect voter registration efforts to civics and other school-based activities. We must also support more cross-field networking. Research and practice in areas like election administration, civic education, youth voting, and media literacy do not function as separate fields, but can be complementary components of a comprehensive effort to support the development of each new generation.

This approach is integral to several current that CIRCLE projects as part of our mandate to not only conduct research, but also make sure that research on youth civic engagement is used to strengthen practice and change systems:

CIRCLE has received support to produce a youth-led research report on how to engage disconnected young voters in federal and local elections by identifying key barriers that can be addressed by local election administrators. Our key partner on this project is Opportunity Youth United. Efforts in this area in 2018 are supported by the Democracy Fund. Democracy Fund is a bipartisan foundation created by eBay founder and philanthropist Pierre Omidyar to help ensure that our political system can withstand new challenges and deliver on its promise to the American people. Follow them online @DemocracyFund.

Update: You can now read the final report here

CIRCLE is a founding member and convener of the Teaching for Democracy Alliance, a national, nonpartisan coalition working to broaden and strengthen student learning about elections and informed voting in k-12 classrooms. The organizations part of the Teaching for Democracy Alliance are working together to equip teachers and administrators to talk about elections and voting in a productive way and to provide students with long-term civic engagement tools. More on the Alliance here.

[1] For consistency and comparison, all voter registration and turnout data in this post are from CIRCLE’s analysis of the November 2016 Supplement to the U.S. Census Current Population Survey.